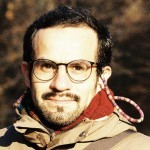 His current research interests include literature, thought, cinema, and music in Latin America during the XXth century, particularly in the Southern Cone and Brazil.

He is preparing the translation into Spanish of a collection of essays by the Brazilian thinker and literary critic Roberto Schwarz. His current research focuses on the relationship between aesthetic form and politics in the early work of the Chilean filmmaker Raúl Ruiz.