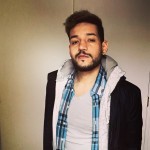 My name is Juan Carlos, I'm from Ecuador. I have a Licenciatura in Literature from Universidad de Buenos Aires, a MA in Latin American and Spanish Literature from the same university. In Buenos Aires, I was a researcher for the Literatura Latinoamericana chair from 2012 to 2016. In New York, I'm a Ph.D. candidate at the Department of Latin American and Iberian Cultures, the Institute of Comparative Literature and Society, and the Medieval and Renaissance Studies Program.

I work comparatively on Pre-Hispanic Andes, Colonial Latin America, and Early Modern Europe, focusing on the interactions between History, Cosmography, Mythology, and Politics.

My current dissertation project at Columbia University "Repleta Est Terra" is a study of Spanish Peruvian historiographical and cosmographical thought. As part of this, I research about ancient fossils, mythical lands, proof-making intellectual practices, and cosmographical polemics of the sixteenth century. This research has been possible with the generous support of the ICLS Summer Research Fellowship, the LAIC Carlos-Saz Parkinson fellowship, the IRCPL Summer Scholarship Fund. Additionally, my side-project "The Invention of Reyes Incas" is a research on the Art-History of an Early Modern Spanish Peruvian political concept of sovereignty. A chapter of this project received the 2019 LAIC Del Rio essay prize.

I love teaching about these topics. All of my courses are based on themes I'm researching and writing about, including Spanish American historical and cosmographical polemics, Pre-Hispanic narratives, reinventions of Classical traditions, mythical creatures such as Giants, Amazons, Cannibals; or places such as El Dorado, Atlantis, and Babylon. In the academic year 2019-2020, I taught two advanced language through content courses: Myths and Monsters of Spanish America and Mythscapes of the Conquest. On 2020 - 2021, I will be teaching the introductory survey Hispanic Cultures 1, focusing on Non-European Hispanic traditions.

I have active participation in academic initiatives. I'm one of the founders and organizers of the Medieval and Early Modern Iberian Cultures network (MEMIC), a research group that brings together early-career professors and graduate students working on source-based cultural and intellectual histories in the Iberian Worlds. In 2019 I served as a Research Assistant for the Spanish Italy and Iberian Americas Columbia/Getty Research Project.

My core principle is that every academic undertaking is an opportunity to research, innovate, and generate a changing impact. This includes teaching, organizing, and writing.