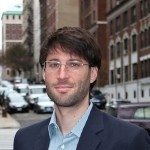 Seth Kimmel studies the literatures and cultures of medieval and early modern Iberia. He earned his B.A. in Comparative Literature and Religion here at Columbia and his Ph.D. from the Department of Comparative Literature at the University of California, Berkeley in 2010. Before joining Columbia’s Department of Latin American and Iberian Cultures in 2012, Seth spent two years as a member of Stanford University’s Mellon Fellowship of Scholars in the Humanities. During the 2018-2019 academic year, Seth was the John Elliott Member at the Institute for Advanced Study in Princeton, NJ. At Columbia, he is on the executive committee of both the Medieval and Renaissance Studies Program and the Institute for Comparative Literature and Society.

My first book, Parables of Coercion: Conversion and Knowledge at the End of Islamic Spain (University of Chicago Press, 2015), is an intellectual history of New Christian assimilation in the sixteenth century. The book argues that canon law, philology, history writing, and other disciplines were all transformed by hotly contested debates over eradicating Islam and Judaism from the Iberian Peninsula and converting non-Christians elsewhere in the Spanish empire. Two in-depth audio interviews about the book are available online, one at the New Books Network and another on the Ottoman History Podcast. Selections of reviews of the book are available here. The American Comparative Literature Association awarded Parables of Coercion the 2017 Harry Levin Prize for best first book published in the field of Comparative Literature. In 2020, Marcial Pons published a Spanish translation under the title, "Tener al lobo por las orejas": Polémicas sobre coerción y conversión hasta la expulsión de los moriscos.

My second book project, which I worked on during the 2018-2019 academic year at the Institute for Advanced Study in Princeton, studies the relationship between cosmography and bibliography in early modern Spain and, more generally, the impossible dream of acquiring and organizing universal knowledge. I am particularly interested in Hernando Colón and his library and circle of interlocutors in early sixteenth-century Seville, and in the varied humanists and historians who helped conceive and actually create the Escorial Library in the second half of the same century.

In addition to the history of science, the history of the book, and what we might call "multiconfessional Iberia," other research and teaching interests include Mediterranean and transatlantic studies, literary theory, and comparative literature. A selection of my academic articles and books chapters are listed below. I also occasionally write for a general audience in English and Spanish. My most recent essay, for Public Books, was "What's in a Bookstore?"

I teach both undergraduate and graduate classes on medieval and early modern Iberia, always with a comparative approach and often with a focus on the sixteenth and early seventeenth centuries. In recent years, I have taught seminars on theories of secularism and religion, the history of reading, early modern cartography, Renaissance poetics, and cultural exchange and conflict among Iberian Christians, Muslims, and Jews. Most of my classes include some primary source research component and visits to New York area archives and libraries, and in all of my classes I try to help students become more effective and convincing analytical writers, as well as thinkers and readers. Students in my classes make ample use of CourseWorks and Wikispaces, and have occasionally experimented with ambitious digital mapping projects and research in electronic archives.

I strive to be an accessible and candid teacher and adviser, and I am always happy to brainstorm research ideas and troubleshoot writing issues. So please don't hesitate to drop me an email or stop by my office hours.

“Fashioning Precedent: The Imperial Politics of New Christian Assimilation.” Forum: “Empire and Exceptionalism,” edited by Andrew Devereux, Republics of Letters: A Journal for the Study of Knowledge, Politics, and the Arts, vol. 5, no. 3, Feb. 2018, pp. 1-8.